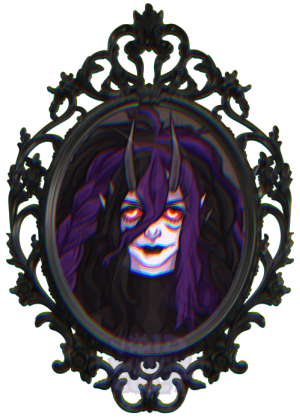 Ayooooo, I am really bad in talking about myself and this page will probably go through some big changes here and there over time but I just want something to be here at the moment so I know how it will look like. Please bear with me.

There are a lot of words that could describe me but I myself are not so sure on how to narrow them down to just a bunch. I guess it's ever-changing, here and there, now and then...a fleeting moment in time that is too soon gone already. I recommend everyone to get their own opinion on me, though I tend to not want to show too much of my entire self. Yet, I remain a fragment in the memories of those I have met or those who happen to stumble upon my ramblings and art on the internet.

Either way.....let's see what I am going to do here! If you want to listen to some good tunes, just go here!

Who is the Void Witch?

The Void Witch(pictured on the right) began their life as my witchsona back when it was popular to make one on tumblr years ago. I kept them as a persona overall, in the end identifying with them and the entire topic of 'void' and such, overall they can also be described as my voidsona, I guess. I don't really feel comfortable in the concept of what the majority describe as 'being human' yet I am forced to fit in. Thus, the Void Witch is a way for me to be more how I perceive myself.

As a character, the Void Witch is a reclusive centuries old witch who lives in some deep dark magical forest. However, when needed, the door to their shop can appear in any backalley. Their inventory reaches from usual goods needed for witchcraft to weird concepts no one has ever heard of. They share a weird 'not-friendship' with the 'Piemaker' whose bakery finds itself lost from any map yet appears to those who are lost and away from civilization. The Void Witch appears grouchy and desinterested at times, devious and outright hostile at others. It's hard to say in wich mood one might find them in, but they're always willing to sell you something.

Creativity: What I enjoy the most is world building and making art, both traditional as well as digital! Nothing makes my heart race faster than being able to let all of my creative juices flow out...rambling about my lore and characters, drawing the concepts, creating new character designs, etc. I've been drawing since an early age already and never really stopped. Sadly I was not able to pursue a job in this field, but maybe it's better this way as I am able to draw and create what I want, without having to conform to ideas and rules from others. One of my favorite media to use is actually linoprint! I sadly had no chance so far to do much but that is about to change. I am looking forward to trying out more such as pyrography.

The Unknown: I have a morbid curiosity with anything inhuman and alike. The dark unknown, supernatural, abberations...the void. It is both terrifying and fascinating at the same time.

If you made it this far maybe you want to take a look at my collection?